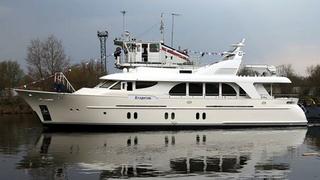 A rare piece of news from Russia comes in the form of the Timmerman 26 motor yacht Atlantic, which has now been delivered.

Launched in May this year, Atlantic is the second hull of this series, the first being Exodus which was delivered in 2009. Built in steel and aluminum, this 26.4m motor yacht is DNV classed and MCA compliant. Her Dutch designers are renowned: the naval architecture is by Jaron Ginton while Guido de Groot is responsible for both exterior and interior designs.

Her modern interior accommodates 10 guests in four cabins, including a full-beam master cabin on the lower deck, and crew quarters for four.

Powered by twin economical 315hp Caterpillar C-7 engines, Atlantic reaches a comfortable cruising speed of 11 knots and has a range of 2,600 nautical miles.

Atlantic is especially built for the harsh Russian climate, but she's also ready to cruise the world.