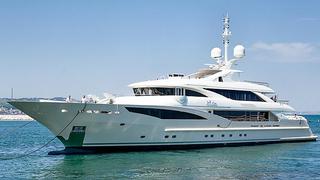 The third ISA 500 superyacht, whose order we reported in December 2010, hit the water in Ancona a few days ago.

Christened Belle Anna, she is a 49.95m tri-deck motor yacht built in steel and aluminium with design from the in-house team in collaboration with Vallicelli Studio. Coming from the same technical platform as Liberty and Papi du Papi, launched in 2011, Belle Anna differs from her sisters slightly with some exterior modifications. ISA's trademark aft staircases that link each deck from stern to flybridge have been abandoned in favour of a more traditional profile. We also note the presence of a beach club area accessed from the swim platform by two wide curved glass doors.

Her interior, designed by François Zuretti, accommodates 12 guests in a master on the main deck and five guest cabins on the lower deck.

Belle Anna is scheduled to be delivered in July.