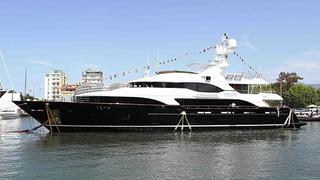 The 43.6 metre motor yacht is the 16th hull in this series, which was introduced in 2002 with Patricia (now JL Seagull). She is also the 100th fibreglass yacht to be built in Viareggio since 1998.

Checkmate's exterior designed by Stefano Righini was slightly improved with new choices like large portholes in the hull. Her beautiful black hull also distinguishes her from her numerous sisters.

Benetti describes the interior, designed by François Zuretti, as 'both rich and sober, with a combination of cherry and Burr Madrona woods, with neoclassical dark inlays enhanced by marble'. It accommodates 10 guests in a panoramic master suite on the main deck and four double cabins on the lower deck.

Powered by twin 970kW Caterpillar engines, the yacht has a top speed of 15 knots, a cruising speed of 14 knots and a range of 3,500 nautical miles at 12 knots.

Checkmate will now start her sea trials, and will be delivered to her owner, a famous American surgeon, this summer.