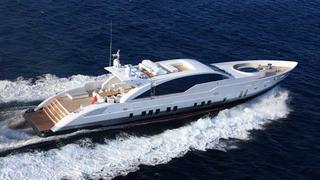 Tecnomar have revealed details of Doubleshot, the latest 36 metre planing yacht from its Velvet line, and a boat that exemplifies the Tuscan yard’s evolution.

Giovanni Costantino has reorganised the company since he took over in January 2009, drawing on the technical skills of his workforce and aiming to combine technological innovation with Italian style in Tecnomar yachts.

Doubleshot, which was delivered to her owner at the end of May, exemplifies these values. She is sleek and lightweight, with a lowered gunwale and large saloon windows that provide great views and a bright interior.

The outdoor areas have been designed to offer comfort and a feeling of contact with the sea - the yacht has a wide bow deck area furnished with a table and sofas, while the large open aft deck, accessed from the transom by a grand, full-beam staircase, has a monumental stone table seating eight people and two sunbathing areas.

A full beam owner’s cabin, two VIPs and two guest cabins provide accommodation for 10 guests, while the crew quarters for six are located in the bow.

Much more will be revealed in the exclusive feature on Doubleshot in the October edition of Boat International.