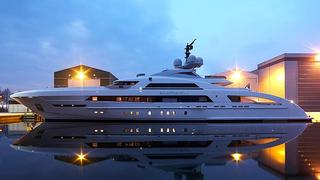 Heesen announces the launch of its new flagship, the 65m superyacht Galactica Star.

The Fast Displacement Hull Form is a truly innovative concept that increases the overall performance of the yacht by around 30 per cent. Powered by twin 4,300kW MTU 20V 4000 M93L Galactica Star will achieve a top speed of 27 knots and a range of 4,200 nautical miles at 14 knots.

Galactica Star has an exterior design by Omega Architects and an interior by Bannenberg & Rowell accommodating 12 guests in a full-beam master on the main deck, a VIP on the upper deck and four double cabins on the lower deck.

Discreetly launched at the end of March, Galactica Star is now leaving the yard for her sea trials. Her delivery is scheduled for June.