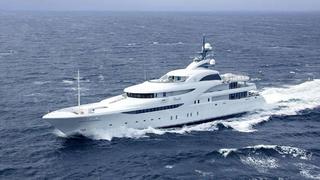 Blohm & Voss shipyard in Germany has delivered the 82m superyacht Graceful on 18 April after a 23-month build program.

Superyacht Graceful was was launched in October 2013. Graceful underwent sea trials at the beginning of April 2014, and she has a maximum speed of 18.2 knots, meeting and exceeding all contractual requirements. Her range is 6,000 nautical miles at cruise. Graceful has now left her berth in Hamburg, Germany.

Blohm & Voss completed both the exterior and interior fit out of Graceful. H2 Yacht Design in the UK is responsible for the exterior and interior styling of Graceful, and the she has been completed in close cooperation between the builder, owner's representatives led by her captain Alexander Mozhayskiy, and project manager Dörries Maritime Services. According to Blohm & Voss, working in close cooperation between the yard and owner's team optimised decision-making, minimised delays and led to a fast build time for such a large and complex yacht.

Graceful's original hull was built by Sevmash in Russia and arrived in Bremen, Germany, in 2010. Boat International was the first to release details on superyacht Project Graceful in May 2012 when she was towed to Blohm & Voss for completion. Included in this process were some complex design features, such as a 15m x 3m indoor pool, which can be converted to a dance floor by raising the pool floor. Graceful also features a a helipad, which defines the yacht's silhouette, and provides a spacious area for landings and take offs.