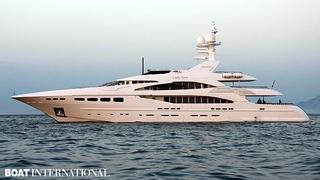 Acico Yachts has recently delivered a 47 metre motor yacht, launched during the spring. Formerly known under the project name DYB47, she was recently spotted with her new name, Lady Dee.

Lady Dee is the Dutch yard's third significant launch after the 43.5m motor yacht Latitude in 2010, and the beautiful 22.8m AY74 in 2011. However, her launch went unannounced and very few details about her are currently known.

The 47 metre yacht has lines which are typical of her renowned Dutch designer Cor D Rover and an interior accommodating 10 guests in five cabins plus a crew of 13. Her engine specifications are unknown, but a top speed of 16 knots was announced when her construction started.

Lady Dee was spotted in Cherbourg in early July, soon after her delivery, and our picture was taken last Friday in Gibraltar. The yacht was reported to be en route to Sardinia.

Acico Yachts will also deliver another yacht this summer, the 49m Nassima, scheduled to make her debut during the next Monaco Yacht Show in September.