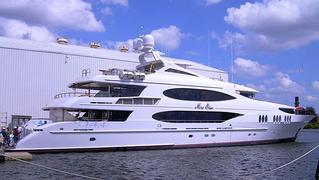 With a length of 49.9m, Mia Elise is a sistership of Mine Games (2007) and Norwegian Queen (2008). Designed by the in-house team, she has an interior by the renowned Patrick Knowles. A couple of developments from her predecessors can be seen in her layout. Firstly, her interior can accommodate 12 guests thanks to an extra sixth double stateroom on the bridge deck. Also the main tender is stored in a stern garage. Built in aluminium, her twin 2,250hp Caterpillar engines give her a maximum speed of 21 knots.

Launched in September (see picture), Mia Elise is now moored at Bahia Mar Marina in Fort Lauderdale and will make her debut during the Fort Lauderdale International Boat Show 2010.