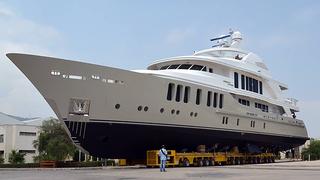 News has just come in about the launch of Orient Star (previously known under the project name of Mina), a 47 metre motor yacht built by CMB Yachts in Turkey.

RINA classed and built in composite to an in-house design, Orient Star is a slightly larger sister of the 46 metre Mystic launched by the same yard in 2010.

Her interior, designed by British designer Tara Bernerd of Tara Bernerd & Partners, accommodates up to 12 guests in five cabins, including a full-beam master suite on the main deck, plus two doubles and two twins with a Pullman berth. The crew quarters house a crew of eight.

Powered by twin 1,450hp MTU engines, she will achieve a top speed of 17 knots, a cruising speed of 13 knots and a range of 4,000 nautical miles at a more economical speed.

Launched two weeks ago, Orient Star will be delivered in September.