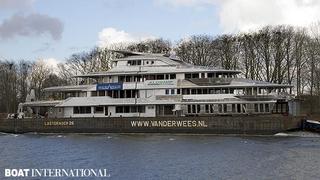 The latest Oceanco superyacht project arrived at the yard this weekend and, as usual, her aluminium superstructure was built by Aluship.

Believed to be the 10th yacht of the Y series (hull number Y710), this 88.5 metre project has naval architecture by Azure Naval Architects and the in-house team, and her exterior design is by Espen Oeino. The interior designer is not known yet, but Y710 will accommodate 14 guests in a master, two VIPs and four double cabins.

Built in steel and aluminium, she is powered by twin 3,600kW MTU engines giving a top speed of 18.5 knots.

This new superyacht, which will join our Top 200 when launched, was shipped to Alblasserdam where she will be fitted out near the 91.5m superyacht project PA164. She is unlikely to reappear until the end of 2014 for her launch.