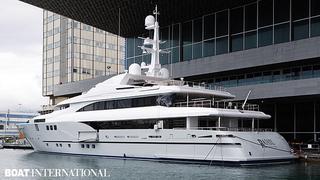 Superyacht Rahil set to be delivered by Mariotti Yachts

Here is another exclusive for our website - the first pictures of this new superyacht spotted by our photographer Bugsy Gedlek during the Genoa Charter Show.

A short investigation has revealed that this is Mariotti Yachts' 54 metre superyacht Rahil. Designed by Luca Dini, Rahil has a lot in common with her sistership Sea Force One, which was launched in 2008.

However, it is Rahil's elegant colour scheme of white and light grey that sets her apart from her sistership, as well as a large arch with a vertical mast which differs from the central radar mast on Sea Force One.

Built in steel and aluminium, Rahil is known to be equipped with twin Caterpillar engines, and is likely to have a similar performance to her sister – a top speed of 17.5 knots and a cruising speed of 15 knots.

Launched mid-February, the yacht looks ready to be delivered, but the shipyard has refused to comment for the moment. We'll update you about this sleek project in the near future.