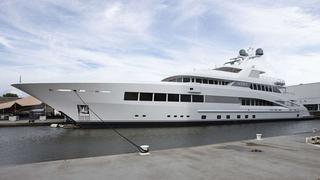 Feadship hull No 687, the fully custom superyacht Rock.It was built for an experienced yacht owner who had chartered Feadships prior to building with the yard. Rock.It's owner, who Feadship's Director Henk de Vries describes as 'unconventional and no-compromise', was hands-on, making many visits to the yard in The Netherlands.

'His between-your-eyes honesty and tremendous respect for and appreciation of Feadship craftsmanship pushed us to new heights,' says de Vries. 'This is the epitome of the Feadship experience, which encompasses the entire design and construction process. Rock.It is a true 21st-century Feadship: stunning aesthetic design nestled in a super-stable oceangoing package that will truly rock the waves.'

The sleek, glass-laden exterior styling is by Sinot Yacht Design, who worked to meet the owner's brief for a striking, innovative and sporty yacht. 'Rock.It is very sleek and bold without being pretentious,' says Sander Sinot. 'A natural flow of lines and surfaces makes the yacht breathe speed and exude elegance.'

Sinot was also responsible for the modern-meets-classic interior design, which makes use of dark-tone precious woods and light stone materials, including backlit white onyx. Rock.It's generous 10.8-metre beam allows for spacious living areas. She accommodates 10 in an owner's stateroom and four guest cabins, and there is accommodation for 12 crew members on the lower deck.

Rock.It is equally designed as a family yacht and for entertaining, afforded by her ample outdoor spaces. A particularly striking feature outdoors is a skylight in the sun deck canopy, which automatically changes its opacity depending on the sun's strength.

The biggest wow factor on Rock.It, though, isn't in plain view. This is the new cutting-edge intuitive control and manoeuvring system technology, which comes from a military background and is employed for the first time on a superyacht with the installation on board Rock.It. The system includes a semi-DP autopilot system, and it will allow Rock.It to maintain her heading at anchor, hovering on the main engines and thrusters. The optimal use of various manoeuvring systems are employed and utilised with a three-axis steering joystick.