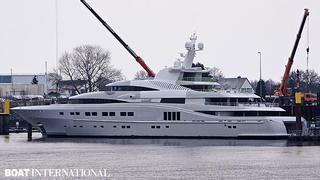 Officially revealed in Autumn 2012 by Burgess, who placed the build order, the elegant 82.3 metre superyacht Secret hit the water at Abeking & Rasmussen's yard in Lemwerder earlier this morning.

Secret (hull 6493) is designed by Sam Sorgiovanni and the interior is by Jim Harris, the long-time designer for the owners, who was also responsible for the interior of the 61.2m Feadship named Secret (now renamed Majestic).

No more details are available for the moment. Note that the yacht is still partially covered by a protective film which will be removed to reveal her definitive paint job.

Secret will be delivered to her experienced owners in May 2013.