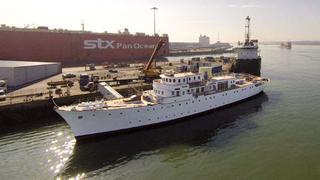 After nearly four years of intensive work, the 65m classic motor yacht Shemara finally returned to the water on 16 April in a carefully choreographed operation overseen by Burgess Marine and Shemara Refit LLP. Boat International magazine's Editor Tim Thomas was live on the scene and reports on witnessing the superyacht Shemara's successful launch.

She was transited to the 1,000-tonne Rolls-Royce syncrolift ship lift at Burgess Marine’s superyacht refit and repair facility at Trafalgar Wharf, Portchester, on Sunday 13 April as final preparations were made, and dipped in the water for 24 hours to test the integrity of her skin fittings.

Under clear skies and with a brisk breeze blowing in from the east, the lowering of the yacht began with an aim to float her out on the tide just after midday. With Williams Shipping on hand to facilitate the tow from Trafalgar Wharf to the Port of Southampton – where the refit works will be completed and the yacht will undergo commissioning and sea trials – the lift was gently lowered and the elegant lady floated once more, sitting high on her lines with empty tanks. The delicate operation went without a hitch, and as Shemara gracefully slid backwards with some gentle urging from the tugs, the passage to Southampton began.

Burgess Marine – one of more than 200 local subcontractors who have supported Shemara Refit LLP – provided specialist support and personnel to the project, including structural and fabrication works, mechanical works and pipe-fitting. ‘Burgess Marine has been an important partner in this project from the moment we took ownership of the vessel in Lowestoft, UK, in 2010,’ said Peter Morton, owner of Shemara Refit LLP.

The project has marked several major milestones for the Trafalgar Wharf development. Burgess Marine’s facility has also seen major investment since the company acquired Testbank Ship Repair in January 2013, including dredging the channel and the ship lift pit to allow vessels up to a 4.5m draught to use the lift. In line with further major investment in Trafalgar Wharf, wires, bearings and winches have been overhauled and the site’s infrastructure significantly improved.

Shemara was originally built in 1938 by JL Thornycroft & Company for the industrialist Bernard Docker. She was requisitioned by the Navy during WWII, and afterwards enjoyed many years in the spotlight as Lord and Lady Docker used her to the full. After being sold to reclusive property magnate Harry Hyams in 1965, she was moved to Lowestoft and gradually fell into decay.

Seeing her emerge from the shed where she has been carefully and exquisitely rebuilt, it is clear that this has been a project of considerable scope. As the sun glinted off her fresh white hull and she made her way – albeit backwards to begin with – down the channel through Portsmouth Harbour, it was clear that this was a renaissance worthy of attention. Watch this space for more soon....