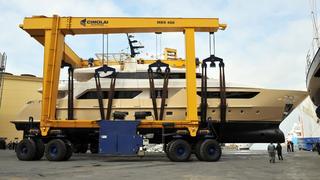 Sanlorenzo has announced the launch in Viareggio of Souraya, the fifth hull of its SD122 motor yacht series.

Souraya is a 37.44 metre semi-displacement superyacht built in composite with exterior design by Francesco Paszkowski and naval architecture by the in-house team at Sanlorenzo. This series is characterised by modern lines with retro shapes inspired by the transatlantic liners of the 1930s.

Souraya accommodates 10 guests and seven crew members. She is powered by two 1,193kW Caterpillar C-32 engines, giving her a top speed of 17 knots and a range of 3,000 nautical miles at 12 knots.

Souraya will be delivered this summer.