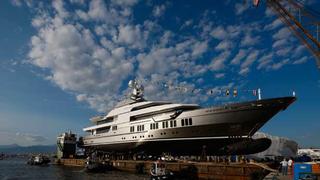 The yacht, which was technically launched at Viareggio in early July has exterior design by Espen Øino, who worked in collaboration with Laurent Giles Naval Architects.

A distinctive angular bow is not the only unusual feature of the yacht, which also has a somewhat innovative layout with internal decks split on different levels creating a 2.7m ceiling height in places and an impressive volume more typical of larger vessels. The owner's area takes up the entire upper deck, while guest accommodation is on the main deck.

The interior design is the work of Michela Reverberi who has created a clean, refined atmosphere using natural stones, high quality fabrics and rare woods.

Side garage doors open out to serve as beaches which remain horizontal despite wakes or rolling thanks to a sophisticated balancing system. Stella Maris is also the only yacht of her size to have a certified helipad.

Twin Caterpillar 3516B engines produce a top speed of 17 knots, while at 12 knots, the yacht's range is 5,500 nautical miles. Quantum XT Zero Speed stabilisers allow the yacht to avoid using the anchor in environmentally sensitive zones.

Stella Maris is the second largest yacht to be built in Viareggio after the 85 metre Nabila, and follows in the wake of Viareggio Superyacht's other distinguished launches - Candyscape II and Roma.

The yacht will be on display at the forthcoming Monaco Yacht Show.