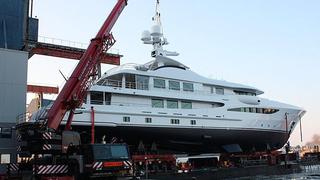 Superyacht Step One launched at Amels

Moran Yacht & Ship, who sold this project, have announced the launch of the 55 metre motor yacht Step One, the first hull of the Amels Limited Edition 180 series.

The proud inheritor of the successful Amels Limited Edition 171 and 177 series, the 180 series is also designed by Tim Heywood. At 660 Gross Tons, she offers a large interior volume. The main deck saloon is enlarged by 30 percent with an additional bar and seating area. The skylounge is full-beam, and the sundeck is extended with a touch-and-go helipad just above the wheelhouse.

The interior, designed by Laura Sessa, accommodates 12 guests in six cabins. The full-beam master suite is on the main deck with its own fold-out balcony. An extra twin cabin nearby can be used for guests or children and four further double cabins are on the lower deck.

Step One will be delivered this year, like several other Amels yachts scheduled for 2012, including another 55 metre Amels LE 180 and the second 65 metre LE 212 recently spotted undergoing sea trials.