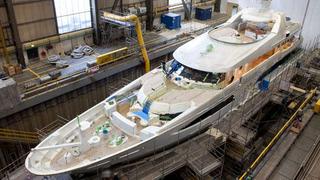 The 49.3 metre superyacht Volpini has finished an extensive refit at her original builder Amels shipyard in The Netherlands.

Volpini (ex-Larissa) was launched by Amels in 2004. The owner chose to return to Amels for the refit to ensure a continuity in standard. 'We wanted it to look seamless, so you don’t notice it’s had the refit,' says owner representative Ben Young of SYM. 'The team did a fantastic job. I would strongly recommend to anyone with a yacht of that quality to return back to the shipyard that built her to ensure absolute consistency and maintain the integrity of the yacht.'

The refit work included a full repaint, machinery and electronics upgrades, and a full interior rejuvenation. 'The owner wanted it to look exactly as it looked ten years ago when it was brought out,' says Volpini's Captain Nathan McFadyen. The original cabinetmaker, Metrica, was called in for the interior refit.

Volpini's refit was completed on time and on budget. Now after her refit, Volpini is back on the water and cruising Mediterranean this summer.