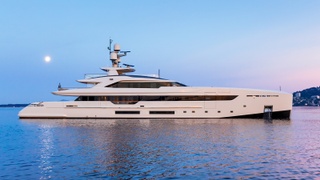 Full time work has resumed on the project, which is the third hull in Tankoa’s 50 metre series following the deliveries of Bintador and Vertige.

Started on spec, the superyacht was sold in March 2020, ahead of the coronavirus crisis in Europe.

S501 is set to feature a striking black hull and metallic grey superstructure. The painting of the topsides is now complete, while the hull coating is on schedule for completion by mid June. The outfitting of the interior, which was designed by Casadio Miami, is set to begin shortly.

Designed by Francesco Paszkowski, S501 will feature a layout largely the same as the two sisterships but with two main differences. The main deck aft will be wholly dedicated to a large lunging area while the forward master cabin will feature a private lounge that can be converted into an extra ensuite cabin.

Speaking about the in-build project, Tankoa sales manager Giuseppe Mazza said: “Although we were effectively obliged to stop work for two months, production is now back on track.

“With construction at more than 75% complete, we’re making up for lost time and looking at delivery by the end of the year to allow the owner to use it in the Caribbean.”

Power will come from conventional diesel propulsion for a top speed of 17.5 knots and a cruising speed of 14 knots.