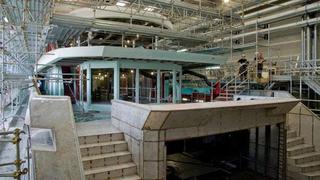 Tankoa Yachts sold the in build S693 superyacht in April 2014. Due for delivery in July 2015, construction of the 69.3m yacht is currently two weeks ahead of schedule at Tankoa’s Genoa yard. Designed by Francesco Paszkowski in a ‘modern zen’ style, the interior has a clear Asian influence, manifested in ‘opium beds’ dotted throughout the interior and a sushi bar on the upper deck.

The theme continues in the ‘winter garden’ that visitors step into through the aft deck’s sliding doors, with its cherry blossom prints and slate floor. Entertaining was clearly central to the brief as there are a number of areas on board that will swallow guests, including space for 20 guests on the aft deck sofas and an another enormous sofa for 16 people in front of an 8o-inch TV in the saloon. To the aft of the upper deck deck, the helipad converts into a dancefloor replete with lights, speakers and a DJ station.

Escaping his guests, the owner will be able to retreat to a sizeable sanctuary occupying the forward half of the upper deck, complete with private study/library, his and hers toilets and a raised floating bed offering 180 degree views through the big forward windows. Moving throughout the boat is made easier by two elevators, one of which opens onto a very private sunbed located atop the sundeck’s coachroof – a modern-day crow’s nest. At water level, the very comfortable beach club offers immediate access to the water, and easy deployment of the toys and two 7.5m tenders.

Tankoa's S693 superyacht is scheduled to debut at next year's Monaco Yacht Show in 2015 before moving on to the Fort Lauderdale International Boat Show and Miami Art Basel for her debuts. She will be available for charter in August 2015.