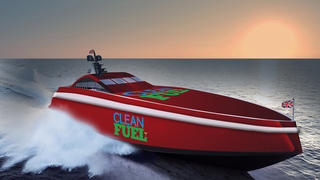 British firm Aluminium Boatbuilding Company has begun construction on a 24 metre yacht, which will aim to break the world record for the fastest circumnavigation by powerboat.

Built for Alan Priddy’s Team Britannia project and due to launch in September, the monohull design has been developed in collaboration with Bob Cripps, former technical director of military boatbuilder VT Halmatic.

The initial two-week stage of construction will include cutting the 12.5km of framing that will make up the internal structure, before aluminium sheets are cut into shape to create the wheelhouse.

Team Britannia estimates that the entire build process will take three months, with the finished boat due to be sea trialled around the UK before the record attempt begins in Gibraltar on October 23.

Alan Priddy, principal of Team Britannia, said: “Once the metal has been cut, there is no turning back. We are committed to Bob Cripps’ revolutionary design, that will save fuel and help us break the world record.”

A key aspect of Team Britannia’s design is an emulsified fuel system, which blends marine diesel with seawater. Combined with a wave-piercing hull, the team expects to record fuel savings of up to 30 per cent.

Power comes from a pair of customised 500hp Fiat C13 engines boosted by Castoldi waterjets for a cruising speed of 22 knots.

The current record for fastest circumnavigation of the world by powerboat stands at 60 days 23 hours 49 minutes, as set by Pete Bethune in 2008 aboard the 24 metre trimaran Ady Gil.

The 2016 record attempt will be overseen by powerboat racing governing body Union Internationale Motonautique, which dictates that vessels must pass through the Suez and Panama Canals, cross the Tropic of Cancer and the Equator, and must start and finish the journey in the same place.