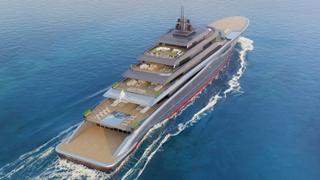 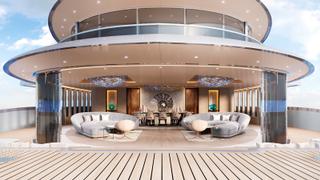 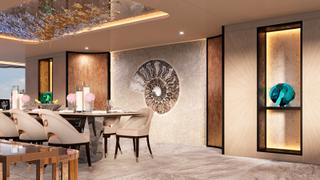 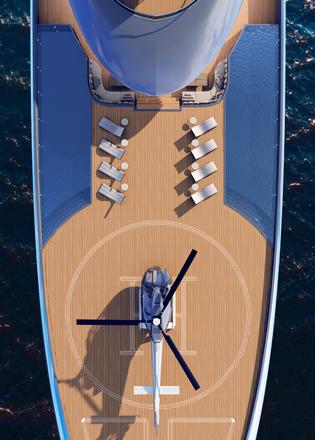 Originally revealed in 2015, Vitality boasts clean exterior lines and a multitude of exterior spaces. This steel and aluminium yacht design would have a beam of 17.3 metres and a maximum draught of 4.8 metres.

Fotiadis told Boat International that he has proceeded to the interior design stage after attracting interest from a potential client.

Accommodation is for 18 guests and 22 crewmembers with a total interior space of 5,180GT giving plenty of room to spread out and relax. Key features include a superyacht helipad on the foredeck, with room for eight sunloungers nearby. A further eight sunloungers would be laid out on the aft deck around the large superyacht swimming pool.

Take a closer look at the 118m superyacht concept Vitality

As the renderings above show, the foredeck would flow seamlessly into the bow lounge, where guests can relax on the two large curved sofas or enjoy a formal meal around the dining table, which is illuminated by a spectacular chandelier. A large nautilus shell motif on the amidships bulkhead adds to the beach club feel on board Vitality.

Power would come from a quadruple MTU 20V4000 M93L engine set-up for a top speed of 22 knots and comfortable cruising at 18 knots. What’s more, Vitality should be capable of a seriously impressive range, thanks to a total fuel capacity of more than 880,000 litres.