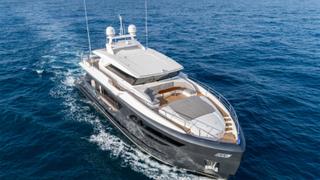 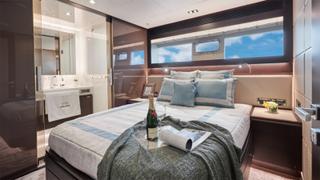 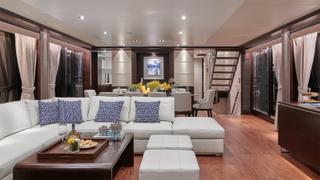 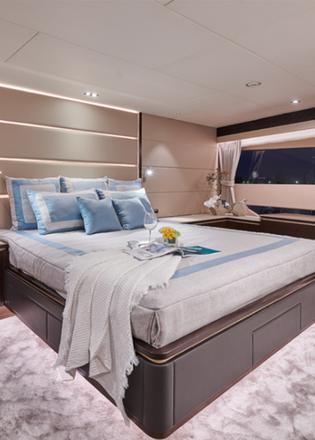 The third hull in Taiwanese yard Horizon Yachts' FD87 Skyline series has been delivered and named Nea Moni V. The yacht, which is the first enclosed bridge model sold to the European market, was built in less than seven months and named after the owner's family origins.

The yacht sports a stone grey hull with a light gold boot stripe. Inside, she features sections of floor to ceiling windows, with key materials including dark Wenge wood and vinyl paneling. This creates a "zen-like atmosphere", according to the yard.

The yacht is also the yard's first 26.5 metre yacht to feature a new walkaround deck design on the flybridge. "This design brings privacy to the interior while providing a seamless transition between the exterior entertaining areas," the yard said.

This fast displacement yacht is the latest in the Horizon FD range, which also includes the FD102 and FD85 models. The first model in the FD87 Skyline series, the eponymously named Skyline, was delivered earlier this year.

The yacht is the yard's first to feature a walkaround flybridge deck. Photos courtesy of Horizon Yachts.

Horizon’s US marketing director Elise Moffitt previously revealed the launch of the FD series, and its consequent “global appeal”, has been integral to the yard’s strong 2018 performance.

“The FD yachts are going to the US, Australia and Europe and having models that have such global appeal means we are now consistently busy. There’s huge momentum moving forward, especially from the FD series,” she said.