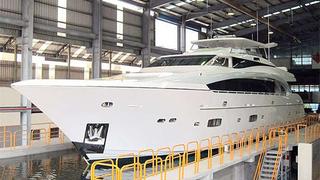 While the first RP110 raised-pilothouse motor yacht was recently launched, and a second hull was recently ordered, Horizon announces the order of a third hull in this series.

This third RP110 motor yacht is ordered by an experienced Japanese owner. This repeat client is stepping up from a Horizon 82 that they have owned for the past six years.

The RP110 series is designed by JC Espinosa with naval architecture of Donald Blount. Her sleek design will allow a top speed in excess of 18 knots, a cruising speed of 15 knots and easy manoeuvering. The interior is available in a four- or five-cabin versions, accommodating up to 10 guests.