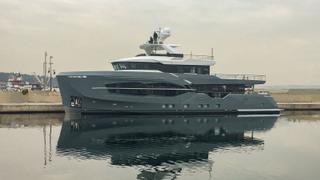 The third superyacht in Numarine’s 32XP series has been delivered.

The third hull in the 32XP series features a similar look and layout to Marla with six cabins providing total accommodation for 12 guests.

Described as a “perfect example of a compact explorer yacht”, the yacht is built from a steel hull and GRP superstructure with external and internal styling by Can Yalman.

Described as “deliberately rugged, powerful and hefty with extensive angular windows,” the yacht features a vertical bow and naval architecture by Umberto Tagliavini.

The interior is just under 300GT and includes 600 square metres of living space. It has been fully customised to reflect the owner’s preferences in layout, design, fabrics and materials.

The master suite sits forward on the main deck while a VIP cabin sits on the upper deck aft. The four remaining guest cabins sit on the lower deck. Crew quarters for a total of five staff comprise a private ensuite captain’s cabin and two ensuite doubles.

Other key details include a spacious main saloon and alfresco socialising areas including a large couch area with a bimini and cocktail table forward of the wheelhouse.