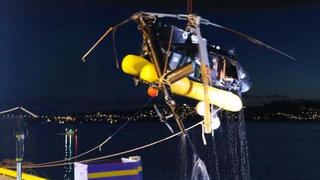 An investigation has begun in Norway after a superyacht helicopter crash injured three people earlier this week (May 10).

Local reports claim that the Airbus AS350 helicopter was attempting to land on board the 59.74 metre Trinity yacht Bacarella at 2130 local time when it crash-landed off the coast of Bergen.

It is not yet known what caused the crash, but local reports suggest that a loose tarpaulin became entangled in the rotor blades, causing the helicopter to lurch backwards before suddenly plunging into the water, tail-first.

One eyewitness told local newspaper VG: "I heard a bang, then a violent splash in the sea right behind the yacht. It seemed as though the helicopter disappeared right into the sea. There was nothing to see in the water.”

A nearby rescue boat was quick to recover all three people on board the stricken helicopter, one of whom, David Tang remains in Haukeland University Hospital with serious injuries.

In a statement, Statens Havarikommisjon for Transport praised the actions of pilot Quentin Smith, who activated emergency floatation gear, which stopped the helicopter from sinking.

Speaking at a press conference on Monday (May 15), Smith was full of praise for the Norwegian emergency services, adding: "We don't blame anyone and we have no negative comment to make about anything. This was an accident and it shows how a normal situation can become life-threatening very quickly."

Speaking about Tang's situation, he said: "There are encouraging sounds coming from the hospital — we're very hopeful"

All three of the men involved are understood to be British citizens and the Foreign Office has said that it has offered assistance to the trio and has contacted the local authorities, who say that there is no evidence of human error or technical failure. No injuries were caused to anyone on-board the yacht, which is believed to be undamaged.

Launched by Trinity Yachts in 2009, Bacarella was built from a steel hull and aluminium superstructure to a Geoff Van Aller design. She can accommodate up to eight guests and 12 crewmembers, and she is powered by a pair of Caterpillar 3512B engines to a top speed of 16 knots.