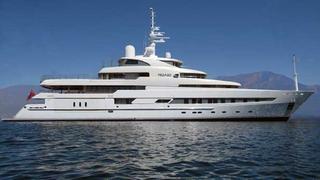 Andy Moore helped design the 73.6 metre superyacht Pegaso, launched this year, and its operator Pegaso Marine felt he was a natural choice to develop further concepts for the platform. He is working on eight designs and has revealed two of the most complete to Boat International.

‘One is very similar to Pegaso in that it has a huge garage, a submarine in the back and a sliding helipad. It is angular, masculine, a bit aggressive and very modern,’ says Moore, principal of Moore Yacht Design.

‘The other is more traditional and feminine. The garage was massive so we split it in two, making half a beach club and half a garage,’ he says.

Both are designed to be robust ‘go anywhere’ yachts like Pegaso, which has an ice class hull, commercially certified helipad, five-person submarine and four tenders. Some GAs have been created but the concepts can be adapted to owners’ requirements.