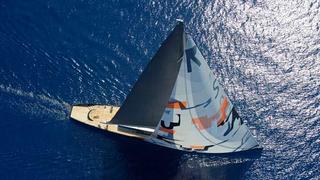 Little is known about the 66m performance sloop Aglaia – but what is known is uniformly exceptional. Her 83m carbon mast is one of the tallest in the world and the largest ever produced by Southern Spars; Dubois designed her with targets such as hoisting the mainsail in less than two minutes and tacking the boat within 30 seconds; and her builder Vitters developed an innovative staysail furler for her.

Suitably for a boat named after the Greek goddess of beauty and splendour, Aglaia is also a gorgeous-looking yacht. Chief among her charms is the painting by Norwegian artist Magne Furuholmen on her Code 1 sail, which at about 3,600m2 (both sides of the 1,787m2 Cuben Fiber sail) is one of the largest fabric paintings in the world.

The owners had a series of Furuholmen pieces on board and after the christening chose to make this art a more integral part of Aglaia’s DNA – by putting his work on her sail. Furuholmen was given no specific brief and he told the owner he would make no sketches (‘you’re going to have to trust me’).

‘When I got asked to do this particular commission, I decided to take a modern approach to portrait paintings of 100 years ago,’ Furuholmen says from the deck of Aglaia. ‘It’s my interpretation of a history. I try to find an angle that both has a connection to the context in which the work is going to be placed and a connection to that person whom I’m portraying.’

For the artist and musician (Furuholmen was keyboardist and art director of the band Aha) the ‘natural approach is to find a linguistic point into the situation’. For the sail, he began with the Christian names of the owner’s family, the letters becoming a ‘personal alphabet’ to generate words. With these he created an abstract narrative (in the orange sections) – a family portrait in text.

The final version was produced by the expert sail painters Harris Sailpainting, in Majorca.