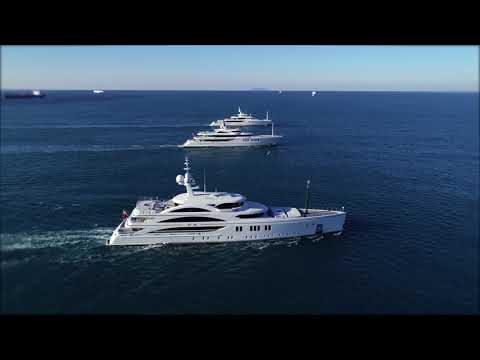 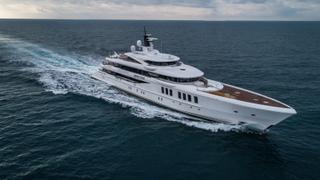 The 69 metre superyacht Spectre can be seen underway for the first time in a new video released by Benetti.

The superyacht, which was delivered to owners John and Jeanette Staluppi in November, can be seen cruising alongside fellow Benetti yachts, the 67 metre Seasense and 63 metre 11.11.

It comes after the yacht was delivered at a ceremony held at the Livorno shipyard on Monday, November 19.

Spectre is the ninth James Bond-inspired yacht commissioned by the couple who are described as "adoring" the secret agent franchise. Spectre is also the third Benetti built for the Staluppis in less than a decade, following Diamonds Are Forever and Quantum of Solace.

The yacht was launched at Benetti's Livorno yard in August earlier this year. Spectre features naval architecture by Mulder Design, continuing a near 30-year partnership between the Dutch studio and the Staluppis that dates back to the 1988 launch of Octopussy at Heesen Yachts.

Mulder was tasked with the structural design, hull and propulsion system and was responsible for the yacht's "High Speed Cruising Hull", which means Spectre will be 30% faster than "normal" displacement yachts. As a result, Spectre will have a top speed of 21.2 knots and a 6,500 nautical mile range at 12 knots.

Formerly known as Hull FB 269, Spectre boasts an exterior penned by Giorgio Cassetta working in collaboration with the in-house Benetti design team. The result is a "traditional" yacht with a "long and sharp bow and extended superstructure."

Attention was given to connecting the exterior and interior designs. To this end, outdoor fixed furniture has been designed and custom made to tie in with the interior, which is populated with shiny teak, black lines and steel.

The interior design meanwhile was handled by the yard's interior stye department, resulting in a decor inspired by "French hotels and boutiques". The main deck, for example, features a main saloon floor inspired by a "Parisian Deco style resort".

Cassetta described Spectre as "a perfect example of a virtuous synthesis between the owners' and builder's cultures." He added: "John and Jeanette Staluppi, with their great experience and energy, have led us to imagine a yacht complete with everything you could wish for boats of this size."

Other standout features on board Spectre include a superyacht swimming pool and touch and go helipad.