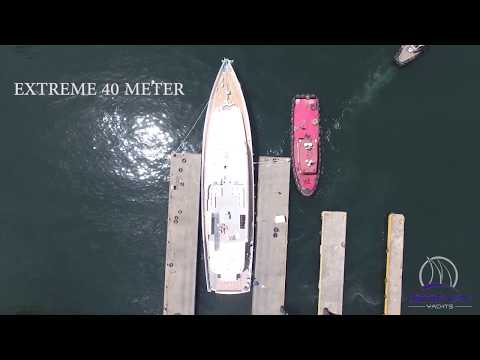 Turkish yard Mengi Yay has launched a new 40 metre superyacht called Extreme which has set off on pre-delivery sea trials.

Finishing touches are taking place at the Istanbul Technical University Tuzla Campus on the luxury sailing yacht which was first ordered in 2011. Mengi Yay estimates that the yacht will be delivered in two months pending sea trials.

Designed by Ginton, the sloop has a steel hull and aluminium superstructure, and has been built to RINA class and Maltese commercial classification.

The interior was designed by Guido de Groot with six guest staterooms forward of the engine room and berths for seven crew. There is a spacious saloon on the main deck with a dining area and a semi-open wheelhouse, while the aft deck is equipped with a large seating area with a bar, dining table and lounging space.

When the transom door is opened, part of the aft deck can be lowered to create an expansive swim platform and watersports area. On the technical side, the mainsail can be furled into the boom and an aluminium mast towers 52 metres above the waterline.

Twin Caterpillar C18 engines will deliver a top speed of 14 knots when not under sail.