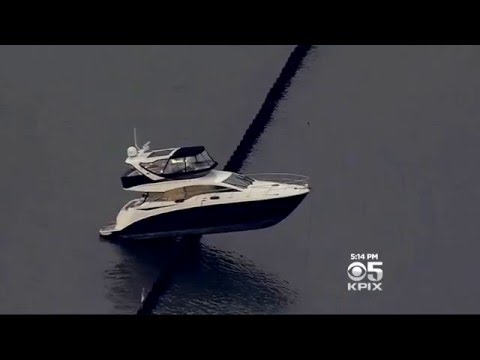 It may look like this 15.54 metre Sea Ray Sundancer motor yacht got stuck trying to jump the sea wall in Oakland Outer Harbour, California. But the reality behind this striking image is less dramatic - her owner ventured out of the channel and didn't see the sea wall as it was submerged in high tide.

The owner of Gotcha, Rafael Lopez, was cruising along the Oakland Alameda estuary with his family, heading to a local restaurant when the yacht hit the sea wall.

The yacht was recovered by a maritime towing company that used a giant crane to lift the 40-ton boat free from the sea wall. The yacht was transferred to a nearby yard, where it was lifted out of the water, revealing substantial structural damage to the hull.

And, while this may not qualify as one of the biggest yacht disasters of the year, repairs following the scrape will take several months and a six-figure sum to complete. However, Lopez said he was just happy that no one was hurt. He says the whole experience was “a little embarrassing” and he won’t be going back to the Oakland Estuary, “not for a long time.”

A Lieutenant of the US Coastguard was quick to stress “the importance of staying in a navigable channel, being aware of your surroundings and following the local charts”.

However, Gotcha is not the first yacht to suffer this fate in 2015. Just last month luxury yacht Nibani ran aground near Rome while 40 metre Sunseeker Jelana ran aground near Corfu in a violent storm in September and the 58 metre superyacht Unbridled ran aground off Miami in May.