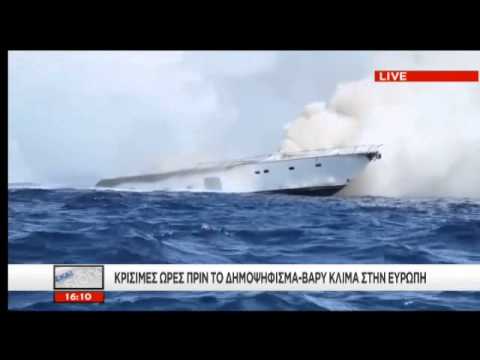 A yacht caught fire and sank off the port of Piraeus, Greece on Thursday, July 2. According to Greek media, multiple explosions rocked the yacht as the fire consumed the 25 metre vessel, known as Ocean 5.

The video below shows the yacht fire being extinguished. The boat is smoldering, and it looks as if the superstructure is non-existent after being devoured by fire. The aft section of the yacht is tilting dangerously into the sea, foreshadowing that sinking is imminent.

The explosions prevented firefighting teams from extinguishing the yacht fire at first, but later the firefighters managed to get the fire under control – as can be seen in the video of the yacht fire above. Despite this, the fire had run its course, and the burned up yacht sank soon after the fire was put out.

At the time of the fire, the yacht was carrying 10 passengers who all managed to safely escape the flames, according to reports. These preliminary reports state that the guests on board Ocean 5 jumped into the sea when the yacht caught fire.

Several small boats and RIBS, sailing yacht Calypso and a Greek Marine Forces firefighting tug were dispatched to assist in the yacht fire, with Ocean 5’s guests transferred to Calypso. The guests were later transferred to the Port Corps-Hellenic Coast Guard station in Piraeus, where the yacht fire is being investigated, for further questioning on the incident.

According to VesselFinder, a pollution-control boat was sent to the scene of the yacht fire to monitor for an oil spill that might have been caused by the fire and subsequent sinking, and so far no oil spills have been detected.