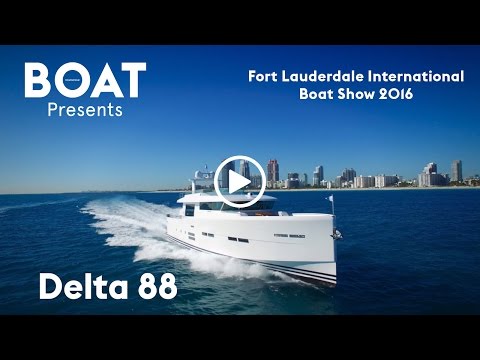 Carbon fibre is an increasingly popular material for building superyachts and one of the yards pioneering this development is Delta Powerboats. The Swedish yard has launched three hulls in its Delta 88 series over the past three years, all of which have been built entirely from carbon fibre. In this video, we caught up with Chapman Ducote, director of America for Delta Powerboats to take a look around:

As he explained at the 2016 Fort Lauderdale International Boat Show, the benefits of building with carbon fibre include lightness, strength and fuel efficiency.

“My desire to try to do something with carbon [fibre] goes back to my racing background,” he said. “I’ve been a race car driver for 20 years and I know the strength of carbon fibre, I know the benefit of carbon fibre and it’s pretty safe to say that I’m alive because of carbon fibre.”

In terms of fuel efficiency, the Delta 88 boasts a maximum range of 645 nautical miles at 26 knots, something that its current owners have been taking full advantage of. Ducote revealed that Delta 88 owners have cruised to some of the world’s most remote superyacht destinations, almost as far as the North Pole.

On board comfort is another key feature of the Delta 88, with a full-beam owner's cabin and three VIP cabins for a total accommodation of eight guests and two crew. Powered by triple IPS1200 engines, the Delta 88 is capable of a top speed of 37 knots flat out. The fourth hull in the series is currently under construction, with a 2017 launch planned.

Video: On board the first Westport 125 superyacht