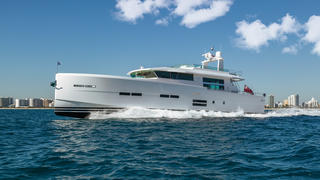 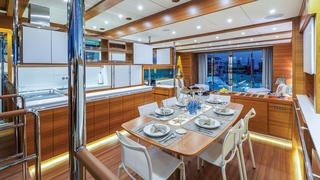 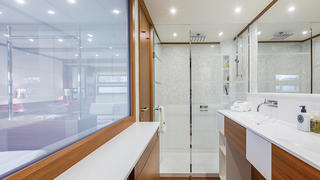 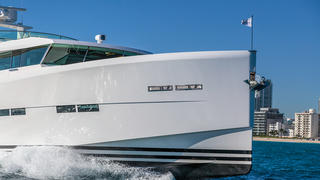 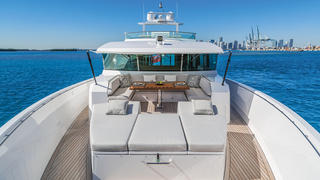 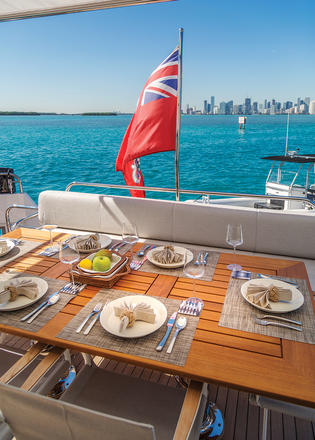 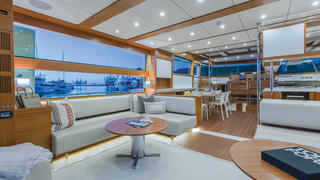 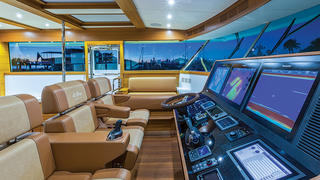 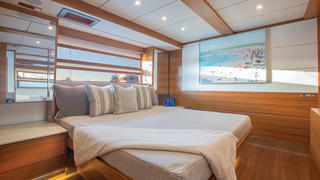 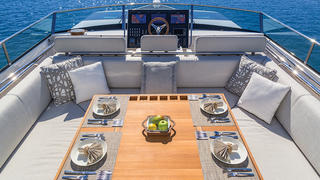 One look at the Delta 88 Carbon yacht Knot Again will tell you that she is different, but linger on board and you’ll find out just how much...

It takes two seconds to hop down the stairs to the lower deck holding onto a handrail that may escape notice. It’s worth noting that it took 42 hours for one man to wrap, stretch and hand-stitch leather onto that banister.

Knot Again represents Scandinavian design at its best — functional and beautiful in its apparent simplicity. This semi-custom boat is Hull No. 3 of Delta Powerboats’ flagship series and the first big Delta to make it to the US. The signature Lars Modin styling, which includes a vertical bow, rectangular shapes and a reverse windshield in green glass, means there’s no mistaking it for any other.

With nary a curve, she’s almost the antithesis of a “sport yacht” in appearance, yet Knot Again gets to the high 30s without much whitewater fuss. For the uninitiated, temporary big black letters on the side reveal one of her secrets, spelling it out: “100% carbon fibre.”

Delta Powerboats is a rare boatbuilder to have committed to carbon fibre on a large scale, which is what attracted entrepreneur, lifelong boater and racecar driver Chapman Ducote to the company three years ago. “I always wanted to build boats in carbon fibre because of my racing background,” he says.

Once he ruled out creating his own brand, he searched for a proper match. Eventually, he found Delta Powerboats, with a growing fleet and quite a following, especially in Europe. Ducote took on the task to help develop the US market.

The first of Delta’s all-carbon boats was the phenomenally fun-to-drive 54 Carbon introduced in 2010. The flagship that it inspired was launched as the Delta 80 IPS in 2013. It became known as the 88 for a number of reasons, including one owner’s fondness for this lucky number and the fact that, well, “it’s a cool number,” Ducote says.

Knot Again’s overall length from its nearly vertical bow to its huge swim platform is actually 25.88 metres, although its interior space is comparable to that of a 28 metre yacht. Why? The 6.25 metre beam, space-saving design, including the vertical bow, and three Volvo Penta IPS 1200s that fit in a compact engine room, allow more room for guests and two crew cabins.

The angular white exterior belies an inner world of warm caramel-coloured teak, stainless steel and glass. The windows amplify the effect created by a high ceiling and low furniture. Hanging cabinets, steel columns and a Siemens hood set in a piece of clear glass define the open galley space.

The streamlined faucets are from Vola, a Swedish company that thrives on the less-is-more idea. The feel is that of a modern loft, but of course, since it’s a moving one, the helm console warrants a closer look. It’s complete and simple at once, as well as user-friendly.

While not the first boat to use iPads to control temperature and lights — or check fuel and water levels — Knot Again has an iPad Pro integrated right into the console. Smart systems include automated Humphree trim tabs for a bit of extra lift aft, a Seakeeper gyrostabilizer for comfort and the CZone monitoring system by Mastervolt.

A small joystick on the armrest of the center helm seat provides two-finger manoeuvring, which is fun to see in action, but the suede-covered three-spoke wheel is what really gives a feel for Knot Again’s sportscar-like handling. It’s so easy to steer, it almost feels like cheating. For really tight situations, the yacht also has a bow thruster with its own set of batteries.

Redundancy and safety features are everywhere and include FLIR’s latest thermal cameras, handy to detect, for instance, an electrical problem in an enclosed compartment. The day I head out with Ducote to experience Knot Again off Miami, a cold front is messing with Biscayne Bay. The waves are short and unpredictable, but the wind isn’t — we take it right on the nose. In spite of it, the boat accelerates smoothly and effortlessly, planing right around 16 knots.

At 22.5 knots, the fuel gauge shows consumption as just below 49 gallons per hour. The three Volvo Penta IPS (which kick out the equivalent of 2,700 horsepower), under ideal conditions, can yield a top speed in the high 30s, but that’s not exactly what Knot Again is meant to do.

“The really interesting thing is the wide range of speeds that this boat can do comfortably,” says Ducote. By now, we are heading back toward the inlet at an effortless 25 knots. It’s easy-going, so I head down, holding onto that leather-wrapped banister.

The VIP cabin forward is larger than most in this size range. The sea parting under the hull’s knife action sounds like sheets tearing. The hull is not pounding and I manage a fairly straight line past the two guest cabins and into the owner's cabin where the surf laps at the window line above the headboard. It is pretty serene. A bathroom, closet and a small but smartly designed crew area serve as extra buffer between the machinery and the master stateroom.

Back on the main deck, I watch a RIB chasing us on our port side; it is bouncing like a bronco trying to shake a rider off its back. What a difference! Of course, Knot Again is much heavier than the RIB, but she is pretty light considering her size, just around 45 tonnes, which is due to her carbon construction.

The process requires no pre- or post-curing. The builder uses Vinylester and divinycell resin to reinforce carbon fiber sheets laid inside the mould. Everything is bound and sealed during vacuum infusion, a process that they’ve used for a long while.

“We decided to integrate all the stringers, everything, into the actual vacuum process. We make it in one shot, like a monocoque,” says Kalle Wessel, Delta’s sales and marketing manager and one of Delta Powerboat’s founders. “There is no secondary bounding in any of the stringers. All bulkheads are carbon fibre all the way through.

“I am a sailor at heart,” he says. “That’s why we started building lighter and faster.” This mandate also led Delta Powerboats to Volvo Penta’s now-well-tested IPS technology, which reliably yields about 30 per cent fuel savings over traditional engines and props.

Knot Again is the first of two 88s to have captured the imagination of experienced American boaters. This owner was familiar and comfortable with IPS. He was very involved with the construction, says Wessel. He travelled to the factory, located on an island off Estonia, a couple of times. He also wanted to take delivery of his yacht in Europe, so he’d have a chance to cruise in Scandinavia.

The shakedown voyage from Estonia to Stockholm, across the Baltic Sea, was not necessarily a pleasure outing. “The Baltic Sea is really rough, so it’s a good test for our boats,” says Ducote. After shipping Knot Again to South Florida, the owner planned for some local cruising, extended excursions to the Bahamas and eventually a trip to Turks & Caicos and St. Barths.

Play your card rights, and you can get more than 2,000 nautical miles out of the 6,000 litres of fuel that Knot Again carries. One of the most surprising facts may be that instead of running their carbon racehorse hard, the Delta Powerboats’ owners enjoy taking them places. “The owner of No. 1 took it within four hundred miles of the North Pole,” says Ducote.

Yep, it’s worth lingering a while and taking a closer look at Delta’s 88 Carbon — or, better yet, take her out for a spin.

First published in the February 2017 edition of ShowBoats International