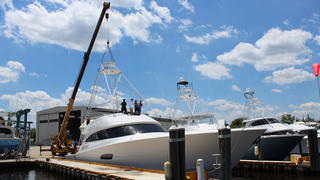 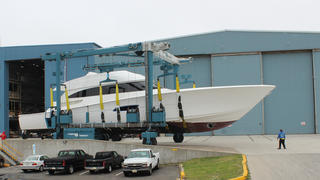 The first open version of the Viking 92 sportsfisher series has been launched at the American yard’s facility in Gretna, New Jersey.

Known as Hull 92110, this 28.42 metre yacht is currently undergoing the final outfitting stage, including the application of a grey hull finish. She is due to be delivered to her new owner on July 22.

The tenth hull in the Viking 92 series, this fast fisher model is the first to be built with an open flybridge, rather than the standard enclosed fly lounge. Construction began last year and the hull splashed less than nine months later in May 2016.

The flagship of the Viking Yachts range, the 92 features six en-suite guest cabins including a full-beam owner’s suite. Crew accommodation is available in the transom, accessed via a separate staircase leading down from the cockpit.

Key features on the first Viking 92 Open version include a centre console helm position on the upper deck with guest seating on all sides.

Power comes from a pair of 2,600hp MTU 16V 2000 M96 engines for a top speed of 36 knots, while the modified V composite planing hull should deliver the kind of all-weather seakeeping that Viking Yachts is renowned for.

Although she is the largest model that Viking Yachts currently makes, the Viking 92 Open is not the largest in the yard’s history, an accolade which belongs to Starter Kit, a 32 metre Viking 105 that was launched in 2001.