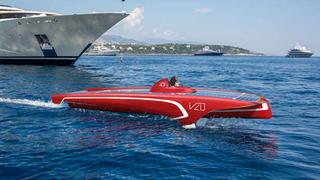 Dutch design studio Vripack has exclusively discussed with Boat International the class of solar powered boats it has created for the Solar1 Monte-Carlo Cup.

In its capacity as technical partner of Solar1, Vripack built the V20 Class of boats, which recently won an environmental award from the Union Internationale Motonautique, which is the international governing body of power boating based in Monaco. The boats will compete alongside the A-Class and Open Class, while Vripack lend support and expertise to all teams.

‘We know solar powered boats from solar powered races in Holland, and we know the founder of the company, Sergei Dobroserdov,’ says Jeroen Droogsma, lead designer at Vripack. ‘Together with him and the Monaco Yacht Club we were looking to set up something in Monaco – which would like to develop itself as a yachting capital, and doesn’t have anything like this. We are hoping to create a thrilling, Red Bull Air Race kind of event, attractive to an audience.’

The Cup will run from the new Norman Foster-designed clubhouse of the Yacht Club de Monaco and hosted by club president Prince Albert II. Teams from around the world will compete in boats powered by the sun, under one of three class categories based on differing technical specifications, solar panels and crew. The races will comprise slalom, fleet and sprint races in front of Port Hercules and in Larvotto Bay.

The V20 is a 6m foiling class, with boats designed to fly above the water, promising the kind of thrilling spectator sport seen in last year’s America’s Cup final. V20 is also a standard class, meaning characteristics such as engines, solar panels and weight limits must be the same on all boats. Teams can get the edge on their rivals using the freedoms within the class, such as propeller design, as well as by honing their tactics. But the V20 Class has also been carefully calculated to foster inclusiveness and develop knowledge levels.

‘We tried to keep the required budget low, to make it possible for schools to compete,’ says Droogsma. ‘So for example with the solar panels we tried to get the lightest panels for the best price. It’s really a balance between price, weight and efficiency.’

‘Making V20 a standard class also means that each year the class boats will be the same (rather than designing totally different boats). So teams will each year improve their knowledge of the design and so also bring the knowledge level of the class to a higher level generally.’

The hull of the second V20 Class boat is almost ready and the electric components will be assembled in two or three weeks. Vripack will test their designs in a solar-powered race in Friesland, the Netherlands, two weeks before the inaugural Solar1 Monte-Carlo Cup brings futuristic yacht racing to Monaco this summer on 10-12 July.