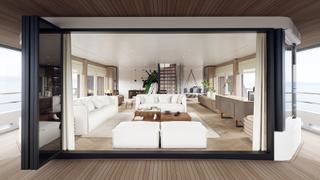 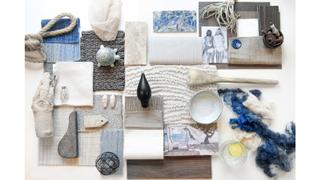 Dutch naval architecture studio Vripack has revealed its latest concept, the 37.7 metre explorer yacht M5, which aims to offer the comforts of home while cruising around the world.

Designed for a South American client, this displacement yacht would feature a wide variety of wood, stone and textiles, as the interior renderings below reveal.

“After carefully balancing the layout of the yacht to various uses during day and night time, we opted for re-used oak from New York warehouses to cover the floors,” explained creative director Marnix Hoekstra. “It immediately provides the yacht with personality which you can’t get by using a new material.”

One of the key principles behind M5’s interior design is the balance between light elements, like the Piet Boon sofas, and dark elements, such as the central staircase, which would be finished in concrete.

“We also only used natural textiles like silk, wool and blends between them,” Hoekstra continued. “This created an understated and original mood.”

The design has been fully modeled and tested using Vripack’s in-house Virtual Reality design tool to ensure that all staircases, service routes, and doors fit together coherently, further adding to the viability of this concept.

The total accommodation capacity and engine installation is undisclosed and no exterior renderings have been released, but the designers revealed that M5 would have a nine metre beam and a maximum draught of 2.5 metres.