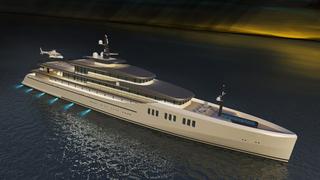 Marnix Hoekstra of Dutch designer Vripack spoke to us at the Monaco Yacht Show about an 85m evolution of its landmark expedition superyacht Dione Sky (ex-Turmoil).

The Liquid Silver concept, which was inspired by the first true expedition superyacht Dione Sky (and was originally known as Turmoil II), retains the practicalities of this much smaller design, but wraps them in a less utilitarian-looking superstructure. It is a progression that Hoekstra believes represents the future of superyachts.

‘I think in the future boats will be hybrids like this,’ says Hoekstra, Vripack sales director, ‘the boxes boats were originally put into – you have a boat for this, a boat for that – that will disappear. People don’t want to stay in a harbour all the time any more, they want to have the capability to go to very remote places, but they won’t only have to do that in a boat which looks like a research vessel.’

Many previous Vripack projects such as 46m Dione Sky and 37m Axantha featured a typical research vessel shape - high bow, then aft a deck space for tenders with a low sheerline, rising further aft to the height of the superstructure.

‘Our designers said if we extend the bow into the superstructure, the boat becomes differently balanced – and from a very functional point of view. A lot of owners today don’t want to see their tenders, or they want to cover their tenders during an ocean crossing because you get heavy weather. ‘

Liquid Silver's forecastle is directly connected to the owner’s deck, making the lines cleaner and while retaining the practical location of the boat deck, it is simply enclosed. The design also allows efficient routing of crew around the boat, as well as a dedicated crew deck above the waterline but under the main deck.