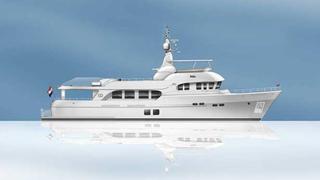 Vripack has revealed details of its Moonen 100 Explorer, now under construction, a sturdy expedition yacht that efficiently incorporates owner input.

The hull and superstructure of the 31m yacht have been built at the Moonen yard in the Netherlands, with outfitting work underway (delivery is expected in May 2013). The Moonen 100’s owners, who have been heavily involved with the build, required a robust expedition-style vessel with facilities that would allow them to travel the world in comfort.

‘We had lots of meetings with the owner at every stage, so he was able to tell us what he wanted from the layout,’ says Jim Horrevoets, project manager at Vripack, which was responsible for the yacht’s design, naval architecture, engineering and interior design.

To allow guests to exercise during make long periods aboard, the owner requested an aft gym with a treadmill and a kinetics device.

‘The challenge there was to make sufficient standing height, when on the treadmill especially,’ says Horrevoets. ‘That we solved by making a recessed floor locally, where the treadmill is placed. We could do that by defining the optimal position of longitudinal girders in the structure in an early phase of the project.’

Other facilities to keep passengers occupied during long journeys include a spa pool, sunbeds and dining space on the flybridge. There is a tender, which can be launched easily with a passerelle on the swim platform, and a larger version with an inboard diesel engine on the flybridge deck, along with a sailing dingy.

Inside, the décor has a ‘caravan’ theme inspired by an Istanbul market. The designers have also taken care to keep the interior light – especially important in areas where the climate forces guests indoors for long periods.

‘There are windows aft of integrated stairs to the sun awning, which brings light into the central staircase – we have a lot of natural light in the yacht,’ says Horrevoets.

Comfort is further improved by the yacht’s flared bow, which enhances seakeeping, while Vripack consulted an expert to minimise noise and vibration.

‘He defined the insulation package and also advised on using dampers for certain pieces of equipment. The location of equipment was done in a way that noise-producing equipment was not in the neighbourhood of accommodation spaces,’ says Horrevoets.

Because the yacht will travel exceptionally long distances, it has been designed to be extremely fuel efficient to increase range, reduce costs and minimise the yacht’s environmental impact. It has an efficient hull shape, bulbous bow, weight-saving measures, and efficient propellers and engines that give it a range of 5,000nm at 10 knots.