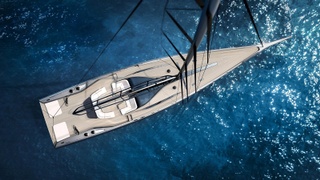 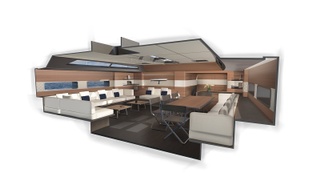 Wally has revealed plans for a 30.8 metre sailing sloop at the Cannes Yachting Festival 2019.

Currently in the final stages of the design process, the Wally 101 is the first sailing yacht unveiled by the brand since it was acquired by the Ferretti Group earlier this year.

The semi-custom yacht features naval architecture by Judel/ Vrolijk while the exterior styling has been developed with Pininfarina.

While displaying all the “hallmarks’ of an iconic Wally design, the yacht will also feature the Wally Magic Keel, which enables the draft to be extended by more than two metres for optimal racing performance. The low draft position also allows owners access to secluded shallow anchorages.

Speaking about the new project, Wally managing director Stefano De Vivo said: “Ferretti Group is pushing on both souls of Wally: sailing and power. Wally has always set itself apart in the sailing world through its design but even further through its technological genius. The Wally Magic Keel is a perfect example of this.”

Wally founder Luca Bassani added: “For racing enthusiasts, the Wally 101 is a yacht optimised under the handicapping system to be highly competitive in corrected time. Additionally, the Wally Magic Keel offers considerable advantages in terms of safety and interior flexibility.”

Built from carbon composite, the Wally 101 will sport a “sleek profile” with a “low slung deckhouse” with a funnel shaped glass roof.

The large cockpit has been designed specifically for open-air living and can be furnished with seating, tables and sun loungers.

Various interior layouts are available, featuring three to five cabins accommodating six – 12 guests. These include either three cabins and three living areas, such as an office, playroom and gym, four cabins and two living areas or five cabins for those wishing to have more guests on board.

Each available layout includes crew quarters aft for two ensuite double cabins for a crew of four to six. The crew accommodation will sit alongside the crew mess, laundry, galley and navigation area. The aft garage meanwhile allows for a four-metre tender.

“Following the original spirit of Wally, the 101 is a yacht offering tremendous comfort inside and outside combined with swift performance while being simple and easy to sail,” said Bassani.