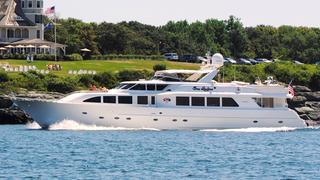 Worth Avenue Yachts is the new central agent for the 34.14m Westport 112 Sea Loafers III, listed jointly between Mark Osterhaven and Michael Mahan.

The semi-displacement, fiberglass-built superyacht Sea Loafers III was launched in 2000 by US builder Westport and enjoyed a refit in 2010. She is in excellent condition and has been consistently updated by her owners and crew. Sea Loafers III accommodates eight guests in four staterooms, with a master suite, two double staterooms and a twin cabin. She stands out from similar Westport 112s thanks to a custom flybridge and aft deck layout.

Sea Loafers III is powered by twin 1,800hp 16V 2000 Detroit Diesel engines, which have low hours and have all servicing up to date. She has a maximum speed of 24 knots and cruises at 20 knots. The yacht has a shallow draft of only 1.8m, making her ideal for cruising in the waters off of Florida, The Bahamas and the Caribbean. The yacht offers added features such as updated audio and video equipment, underwater lights and twin 1,500 gpd watermakers.