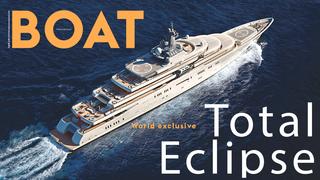 World exclusive: see inside Eclipse for the first time ever, in the April issue

It’s taken five years, some arm-twisting, a little convincing and a share of shameless begging but I am thrilled to say that we’re finally able to feature Eclipse, the world’s most famous superyacht, in our April issue out on Thursday.

I still can’t quite believe it.

When she first appeared from Blohm+Voss’s big sheds in Hamburg in 2009, the headlines were immediate – and she’s remained a hot news item ever since, wherever she is in the world, such is the level of interest in this 162.5 metre, 13,500 gross tonne yacht.

Eclipse held the title of world’s largest superyacht for four years but her owners never set out to build such a big boat, as her designer Terry Disdale reveals in our feature. “When the yacht was still on the drawing board, there was a rumour going round that someone was building an even bigger boat, and the owner was asked if he knew about it,” Disdale explains. “He said he didn’t, and that he didn’t care. Breaking records was the farthest thing from his mind.”

Disdale reveals that, even a decade after he first put pen to paper, there isn’t a thing about Eclipse that he’d change. And the owner clearly agrees, as he’s kept Disdale’s designs largely unchanged.

Make sure you pick up a copy of the April issue to be one of the very few people ever to see inside her, and read all about the four and a half years, nine decks and 100 crew that make up the world’s second largest superyacht.