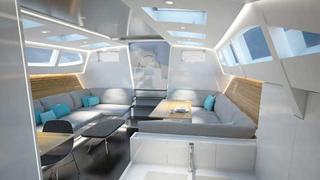 World Superyacht Award winner Adam Voorhees has announced the first project to be designed entirely by his studio, a major refit of the sloop Sleighride.

Voorhees, who was named Young Designer of the Year at Boat International Media’s World Superyacht Awards in 2010, originally worked with the client on ideas for a new yacht, subsequently considering the possibility of refitting an existing boat.

‘We probably went through 10 to 15 candidate boats,’ says Voorhees, principle of Adam Voorhees Design. ‘The client knew he wanted something fast with light airs and a decent sail area, so we started off looking at fast racing boats. Then out of the blue we saw Sleighride, which fitted the criteria – and because it was designed to be a fast daysailer, it was very simple to crew and already had a bit of interior space.’

The new owner has asked for the refit, at Westerly Marine in California, to incorporate automated sail handling systems, so that he can sail solo, plus comfortable, luxurious spaces for when he entertains friends and family.

‘The boat when we found it was pretty traditional,’ says Voorhees. ‘Up on deck there’s a huge cockpit, which is great for socialising, so we wanted to bring a little bit of that into the interior. We wanted to move away from her just being a daysailer, and make her a weekender.’

The salon and the galley, which had been small and tucked away forward to the saloon, were the focuses of Voorhees’ attention. He intends to take down some of the major bulkheads to connect the galley and saloon, creating one continuous space.

The interior will feel cool, natural and open, with multiple skylights. It will be further enhanced with custom furniture commissioned by the owner.

In terms of style and materials, Voorhees adheres to what he calls an ‘essential aesthetic’.

‘It’s really clean and simple. It means being honest with the use of the materials – so we’re going to be using teak but it will be really simple, no crazy finishes – we will bring out the feel and essence of the teak itself.’

When finished, Sleighride will have a 25 metre LOA with a 5.6 metre beam, weigh only 19 metric tonnes, and have a 230 square metre upwind sail area. Originally designed by Sparkman & Stephens and built by Goetz, she features prepreg carbon construction, water ballast, a generous sailplan, and separate entertaining and working cockpits. The yacht has always been a fast daysailer, reaching 24 knots on her first sea trial.