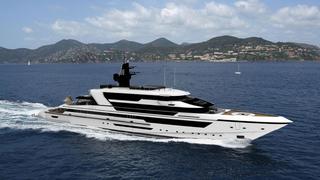 Alvaro Aparicio de León, a finalist in Boat International's Young Designer of the Year Award 2012 - held during the 2012 ShowBoats Design Awards - has made a strong debut in professional yacht design with a modern, well-balanced 85.6m superyacht concept.

‘My intentions since the beginning were to reach a good equilibrium of outside living areas without compromising the interior space,’ says Aparicio de León. ‘A displacement superyacht with the style of a semi-displacement yacht, rather than a floating “superhouse”.’

The design incorporates a variety of outside deck areas, lots of glass for light interiors and a sleek, aggressive profile – but Aparicio de León is leaving finer details for development with an owner or yard.