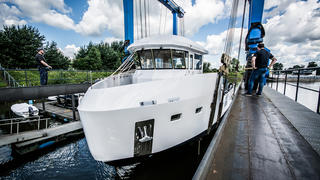 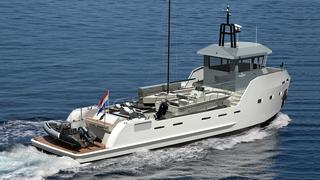 Dutch yard Lynx Yachts has announced that it has launched the first YXT 20 hull, the second model in its series of superyacht support vessels.

The YXT 20 was styled in house with a white exterior chosen to create more of a yachting aesthetic, as opposed to the grey finish of YXT 24.

Interiors are by Franck Darnet Design, with two double crew cabins on board, as well as galley and laundry rooms. The flexible storage area can be fitted out with a refrigerator, wine cellar or additional accommodation.

Back aft, a pair of stern-mounted davit cranes can lift up to 1.54 tonnes each, reach up to five metres, and slew around 360 degrees, allowing tenders and jet skis to be easily loaded onto the 45 square metre deck.

Other key features include a passarelle and 30 cubic metres of storage space below decks. For an added design flourish, the aft deck and first four metres of the main deck are finished in teak.

Propulsion comes from a pair of 715hp Cummins QSM11 diesel engines, which provide an estimated range of 900 nautical miles at a cruising speed of 14 knots and a top speed of 15.5 knots.

The YXT 20 is currently for sale, having been listed by Fraser Yachts in February, and will go on display at the Monaco Yacht Show in September.