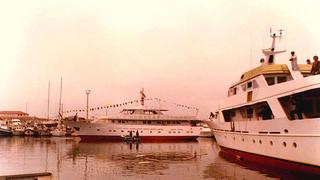 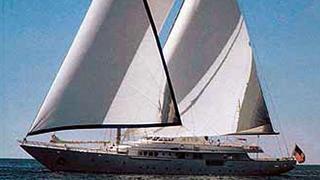 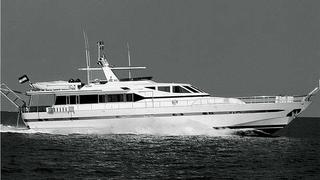 The history of Benetti can easily be told in a recitation of its launches, but the more interesting story is the one told in human terms. In 1873, Lorenzo Benetti scraped together the money to buy the yard where he had been a frustrated shipwright. During the next 40 years, he and his sons Gino and Emilio established a reputation in fishing boats and large barquentines by meeting deadlines and high quality builds. On his death in 1914, the boys renamed the yard Fratelli Benetti (Brothers Benetti). Soon their four sons joined it.

In the mid-1950s, Emilio’s sons switched to steel production and started their own yard, M & B Benetti. Mindful of the improving economy, they concentrated on building yachts for private use. Lorenzo’s youngest son, (also Lorenzo) enticed this new market during the 1960s with steel motor yachts from 18 to 33 metres.

In 1962, Lorenzo arrived at the Genoa Boat Show with an 18.6-metre semi-displacement steel yacht with aluminium superstructure and teak decks. The Delfino had a wood panelled interior, the latest furniture and fittings and a modern galley. It was a game changer. He sold five at the show.

Euginio Manfredi was the boat’s designer and became the unlikely design genius behind the Benetti brand. Manfredi had never been aboard a boat. The brothers had heard about him and thought something new in design would help grow the business. At the yard he found wooden hulls being finished as military boats for Brazil. One 16-metre hull – a crew transport vessel with two decks and an open helm – became his full size template for developing a yacht.

Manfredi, now 90, says he was born to design – a car, a boat, a tub…. He takes a notebook and begins sketching. ‘Chris-Craft and DeVries were among the two or three building cabin cruisers,’ he says. ‘I moved the wheelhouse up and enclosed the entire aft of the upper deck for a saloon so you can have room for spending a week on the sea. I created an aft cabin for the owner and two cabins forward of the engine room for guests and introduced the concept of privacy – separation of the guests and crew.’

After the Delfino was the Tirreno (1964), the Mediterraneo (1965) and the Gabbiano (1966). Benetti took the Mediterraneo over the 30-metre mark in 1967. This softer look with its canoe stern became the Benetti look for years. The real advantage he says he had was inventing the Italian style. He designed everything, even the furniture, based on the idea of creating a villa on the sea for his customer.

By 1970 Benetti, with 54 hulls, was the fourth-most prolific builder of yachts over 18.3 metres. By 1980, it was the world’s largest builder of motor yachts over 24 metres, its closest competitors Feadship and Burger, which had switched to aluminium production.

Enter Adnan Khashoggi, billionaire middleman for Saudi Arabia and his Jon Bannenberg design for 86-metre Nabila. Lorenzo took the contract even though Khashoggi had negotiated a rock-bottom price with brutal penalty clauses for lateness and no delivery date modification for change orders. The yacht was delivered in July 1979 at a considerable loss to the shipyard. Even the contract for the 46 metre motor-sailer White Gull (pictured above) launched in 1983 could not defray bankruptcy in 1984.

Interestingly, that was the same year a Turin company, Azimut, which started as a boat broker/importer, launched the first fibreglass production yachts over 30 metres. Paolo Vitelli had founded Azimut in 1969, while still in college. Of five bidders for Benetti in 1985, his company was the only one judged qualified to take on the yard.

Just as Azimut was a modern product, Vitelli and his management team brought new technology to the Viareggio yard, used modern techniques for time and cost controls and made a commitment to quality, while concentrating on metal boats of 40 to 50 metres.

The first post-Fratelli Benetti was 45-metre Rima designed by Terence Disdale in 1987, followed by Sea Sedan, Shamwari, Joalmi and Sahab III. Although it would build any custom contract, Benetti updated its own line with the full-displacement 50-metre Golden Cell series in 1995.

To fill the gap between large Azimuts and small Benettis, Benetti introduced its composite Classic Series with designs by Stefano Righini and interiors by François Zuretti. The first, 35-metre Stella Maris, re-established Benetti at the forefront of semi-custom yacht building with her launch in 1998.