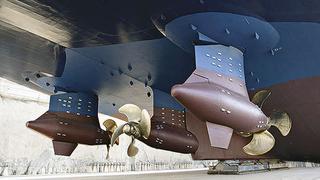 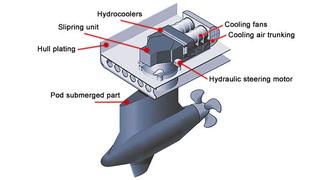 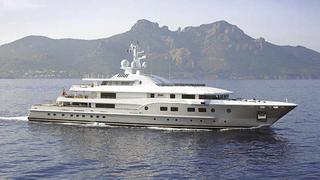 When the newest Queen Mary II was launched a great deal of interest was shown in her unique propulsion system: four pod drives located outside the hull to minimise noise and vibration.

Two of the pods were located outboard and forward of the aft pair. The aft pair of drives rotated, or azimuthed, to turn the ship and eliminate the need for rudders. Both of these aft drives could turn through 360°, giving the vessel the ability to turn in its own length. In addition, the pod drives eliminated shafts, rudders and other attachments that create extra drag on the hull and waste fuel.

Pod drives use one of two forms of power. On larger, more conventional craft, the main diesel engines are located close to the drive system, where a horizontal shaft drives through a gearbox to the pod’s vertical shaft that runs down the strut of the drive, where it is again changed in a gearbox to a horizontal drive.

This type of drive system is known as a ‘Z’ drive. If the engine driveshaft is vertical, the drive might be an ‘L’ drive, rather like an outboard engine which has the engine mounted vertically above the vertical shaft. Both of these drives use gearboxes to change the direction of the main engine thrust.

The second form of power is diesel or some other form of electric power generation (a gas turbine or batteries, for example) driving an electric motor inside the pod below the hull.

Both methods may power either a fixed pod or an azimuthing pod. The pod can turn through 360° because electrical power is transmitted via slip rings at the connection point.

Pod drives may have a propeller at either end but some manufacturers, notably Schottel, have pods with props at both ends. It is assumed that pods with the propellers at the front – tractor or puller props – are more efficient than those with the prop at the stern (pusher props) where they operate in the turbulence of the pod gearbox and strut. On tractor drives, the strut and gearbox are assumed to recover some of the rotational thrust lost in the propeller wake to improve efficiency.

A good example where this is emphasised is the Rolls-Royce thruster with a large skeg and very slim strut. On the Schottel drive with props at both ends, the trailing propeller revolves in the opposite direction to the leading prop to recover power lost in the wake.

The style and shape of the propeller is also critical to the success of the drive.

Higher speed propellers tend to have variable pitch distribution over the length of the blade to reduce noise and vibration on the hull. In many cases these drives are puller or ‘tractor’ drives to help reduce the overall propulsion system drag.

Lower speed configurations may have a ‘Kort-style’ nozzle around the propeller to increase bollard pull and to protect the propeller in the event of a grounding.

This type of azimuthing drive might be most suitable for exploration yachts that might need to be dynamically positioned. No matter what the configuration, the hull design needs to be taken into account when specifying an azimuthing drive.

Ideally, the hull bottom will be flat and it will be wide enough that the pods can turn through 360° without protruding from the side of the ship where they might hit the dock wall when moving away from alongside. By having the drive in the horizontal portion of the ship’s hull the propeller trust is horizontal, as is the water flow, to maximise efficiency.