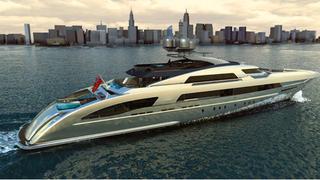 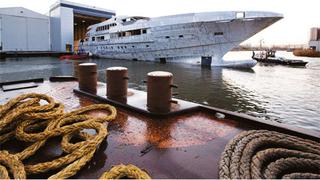 If you want to make a yacht go fast, there is one relatively simple way of doing it: throw as much horsepower at it as possible. But while this sounds easy on paper, in reality the challenges are far greater. Not only are you likely to push the cost of fitting out and running the vessel to the extreme, you also face the problem of diminishing returns.

As you reach the limits of your hulls hydrodynamic efficiency, each additional horsepower has less and less impact on the speed  particularly for a large yacht where a planing hull becomes impractical. You will end up at a point where all you are doing is pushing a wall of water, burning more and more fuel to no effect. So how do you create a fast, 65m yacht while keeping your propulsion package  and your fuel bill  within sensible bounds? An innovative 65m under construction at Dutch yard Heesen may have the answer.

The yacht is being built on the revolutionary fast displacement hull form (FDHF), a concept developed by Dutch naval architect Van Oossanen Associates. This hull design went through extensive tank testing at the Wolfson Unit in Southampton early in 2010, and a patent has been applied for it.

The FDHF hull offers a solution to the problem of having to have different hulls for displacement and semi-displacement modes of operation, explains Peter van Oossanen. This one hull is efficient in both speed ranges and thus offers great flexibility when designing a semi-custom series; the naval architecture and engineering do not need changing according to the speed requirements, as long as the engine room can take both large and small engines.

Moreover, the FDHF hull has often as much as 15 per cent less resistance in the semi-displacement speed range compared to a hard-chine hull, which translates to a lower power requirement for the same speed.

The design dispenses with traditional hard chine and round bilge ethos, and it is claimed that this new approach improves the efficiency of the vessel by up to 30 per cent  a considerable margin.

The slender, tweaked hull form results in a very low wave profile over the entire speed range while improving its sea-keeping and manoeuvrability, which all leads to reduced running costs and reduced environmental impact.

The narrower beam of the FDHF hull has produced a small 65m in terms of volume, but offers the advantage of a 27 knot top speed, and a 24 knot cruise speed at 75 per cent engine power output from twin, 4,300kW 20V 4000 series MTU engines.

It is a design ethos that has obviously caught the attention of Heesen and the yacht-buying community at large.

Not only is the general concept of the narrow, efficient hull form gaining traction elsewhere, but in September 2012 Heesen unveiled several additions to its range of yachts, all based on the FDHF principle.

These new models include a 55m FDHF and a 42m FDHF.

Among the claims the yard makes are that the 55m is the first steel yacht over 50m with a fast displacement hull, making her the most fuel-efficient yacht of her size and style.

Heesen claims that the 42m provides a 35 per cent increase in efficiency for speeds up to 16 knots, with cruising speed fuel consumption reduced by 30 per cent and an impressive range that tops out at 4,000 miles  pretty impressive for a 40m yacht, and proof that hull design is as important as the engine configuration when it comes to efficient operation.