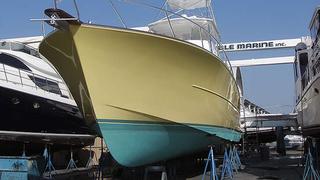 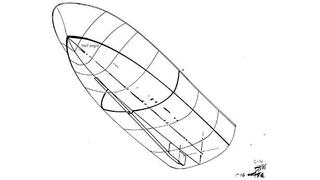 How to make a better yacht bow

When asked most seafarers say that a bow’s job is to enable a vessel to pierce through waves, slides over waves, keep water off the foredeck, or even that it’s just a place to put the anchor and chain. But few realise that the bow shapes the waves that flow alongside the vessel. A badly designed bow will create unnecessary drag; while a good one will cut resistance and increase comfort.

In most cases, the criteria for the design of the bow begins with the half-angle of entry. This is the naval architect’s term for the more commonly known ‘horizontal bow angle at the waterline’.

A yacht with a large half-angle of entry will slam into, or at least fight, waves often throwing a lot of spray and green water ahead of it. A vessel with a fine entry and narrow half-angle will slide right through a wave with little resistance.

As a yacht’s half-angle of entry increases, the bow becomes more prone to slamming into waves, which in turn, requires more power to keep the yacht moving steadily into the sea and tends to increase pitching.

On a motor yacht a fine angle of entry, say 12 degrees, is suited to high-speed semi-displacement style yachts, whereas a normal half-angle is between 18 to 24 degrees.

A very fine half-angle – less than 10 degrees – is to be avoided. It makes the bow narrow and reduces the forward volume of the hull forcing lockers, gear and equipment aft. That said, a long, narrow vessel will have a finer angle of entry than a short, wide vessel, so a specific half-angle of entry should only be used as a comparison factor on vessels of similar length and beam.

The widest half-angles of entry – from 30 degrees to more than 40 degrees – are rarely found on yachts, but can be seen on scow-type barges that move at very slow speeds and throw a lot of water ahead of the bow. These cargo carrying vessels don’t have passengers and move slowly, so wave impacts and slamming can be accepted.

However, if the wave is very large and the yacht has a narrow half-angle, the wave might simply rise up and wash across the deck. To eliminate this designers often flare the upper bow so the rising wave crest is turned back into the ocean.