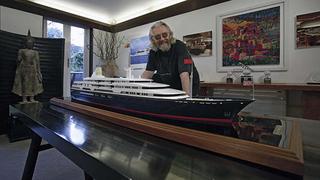 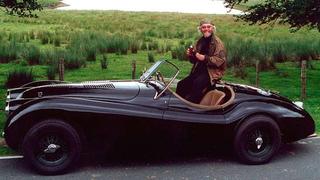 No one fits the description of ‘rock star designer’ better than Terence Disdale. His long flowing locks are a little streaked with silver now, matching the silver toes of his cowboy boots, both brushed up for the odd award ceremony.

I first met ‘Diz’ at the world-famous ‘Bannenberg University of Great Yacht Design’ in Chelsea, in 1971. He was the archetypal 1970s man with long flowing dark hair, long flowing dark beard and long flowing Afghan coat, not to mention the flared, floral loon pants.

In those days, Terry was travelling around Europe visiting yards, supervising the projects he controlled, designing on the road and performing the role of ambassador for the ‘Chelsea University’.

He left in 1973 and established his own design studio on the Green in Richmond, beginning work immediately for an ever-growing list of clients, most of whom have returned to him to repeat the process.

Terry has surrounded himself with a small team of talented people who aid and abet him, creating wonderful complete yachts and stunning interiors within other designers’ exteriors (one other designer who shall remain nameless).

These rich collections of tactile finishes and textures are unique in the yachting world, and Terry’s work stands out from the competition, when it is allowed to be seen. So much of his work is found aboard private superyachts that it never gets widely publicised. Major projects such as Al Salamah, Ecstasea, Montkaj, Sussurro and the Tigre D’Or series have kept his name at the forefront of the yachting industry for many years, and joint projects with another London-based designer, creating Pelorus, Ice and the yet-to-be-completed_ Safari_, will help keep his name in lights for many years to come.

His talent as a designer is equalled only by his good humour and generosity of spirit, which keep his team – and his friends – loyal and close at hand. Always ready with a winning smile, a good-humoured comment and a generous willingness to sign the restaurant bill or pay the barman, his entertaining is legend. He parties hard and always enters the fancy dress competitions, together with the scantily clad TDD team, with great gusto and success. But even when dressed as Neptune, he will still be wearing his silver-toed cowboy boots! His enthusiasm for fishing and his old XK120 Jaguar makes demands on his time when he is not designing yachts or planes.

With a large number of yachts now under construction, ranging from 50m to 160m, Terry’s place as a leader in the yacht design industry is ensured far into the future, and he will maintain his reputation for many years as the ‘rock star designer’ we know and love today.